Introduction to drug target biology and its role in drug discovery

Drug discovery and development is a long, expensive and risky process. On average it takes roughly 12 years and around $2.6 billion to develop a new drug (1). The Food and Drug Administration (FDA) of United States, considered as the world’s foremost pharmaceutical regulatory authority, requires comprehensive evidence on every new drug’s safety and efficacy profile for market approval. However, it is not mandatory for FDA to have information on drug target identity or target biology for providing approval (2). Nonetheless, drug safety and efficacy are directly linked to the target biology that fundamentally drives mechanism of action (MoA) of the drug. Ultimately the drug target plays an important role in the disease pathophysiology.

It is noteworthy that ‘Safety’ not only depends on drug related parameters but also on the drug target profile. The target expression in diseased and healthy tissues, phenotypes and pathways perturbed on target inhibition or activation have a significant impact on target safety. The role of a target in the disease pathophysiology, and expression pattern has a huge bearing on the drug efficacy, hence a comprehensive knowledge on the target associated diseases and information on proof of concept studies becomes mandatory. A Target Dossier is a compilation of all the information that is critical for assessing target safety and risk, and for developing suitable mitigation strategies. The dossier also helps to prepare, plan, and execute a data driven informed drug discovery and development program.

In the case of phenotypic screening or classical pharmacology, drugs are identified without prior knowledge or bias towards a specific molecular target. The pharmacological actions of a drug are identified in cells, tissues, or animals. Although an important approach, it is beyond the scope of our current blog. The second highly successful strategy is target-based drug discovery (3).

Target-based drug discovery can be used for the discovery and development of small molecules, antibodies, protein and peptide-based drugs. In target-based drug discovery, the knowledge of the biological (drug) target and its role in disease pathophysiology is essential before a pharmaceutical company starts lead discovery (3). At this stage a comprehensive and unbiased Target Dossier can assist in better project planning, execution and early decision-making. A document containing comprehensive 3600 target information on aspects such as target structure and experimental models can be used to plan high throughput assays to screen compound libraries for “hit” identification.

Drug discovery is often associated with high risk, resource crunch and time constraints. Pharmaceutical innovation is also limited by the fact that drug companies tend to work on the same proven drug targets. This leads to increased competition and “me too” drugs (5). The level of competition for the proven drug targets is higher than the large proportion of novel targets in the pre-clinical stages of development (5). Also, competition for novel targets increases along with the clinical stages, with relatively little competition in preclinical stages and high competition by phase III (6). As there is advancement in clinical phase, the validity of a target also increases and so does the level of competition (5). Hence, due diligence around a target of interest becomes a mandatory exercise for a pharmaceutical company before embarking on the long, time-consuming, expensive and high-risk endeavour of drug discovery and development. Clinical translatability to ensure that a drug’s activity against the target is efficacious with minimal side effects marks the crucial difference between success and failure of drug development.

A comprehensive Target Dossier considers all the properties of a good target. If a target fails on one or multiple parameters, it can have a negative impact on the drug discovery and development process. Hence, sooner a pharmaceutical company has a complete drug target overview, faster it can take a go/no-go decision and save on precious resources.

Need of the hour

Excelra is strongly positioned to deliver tailor-made target assessment dossiers based on unique requirements of our global Biotech and Pharma clients. The dossier is a compendium of information on the complete target profile including structural, systemic and functional aspects of a protein and the gene-encoding it. 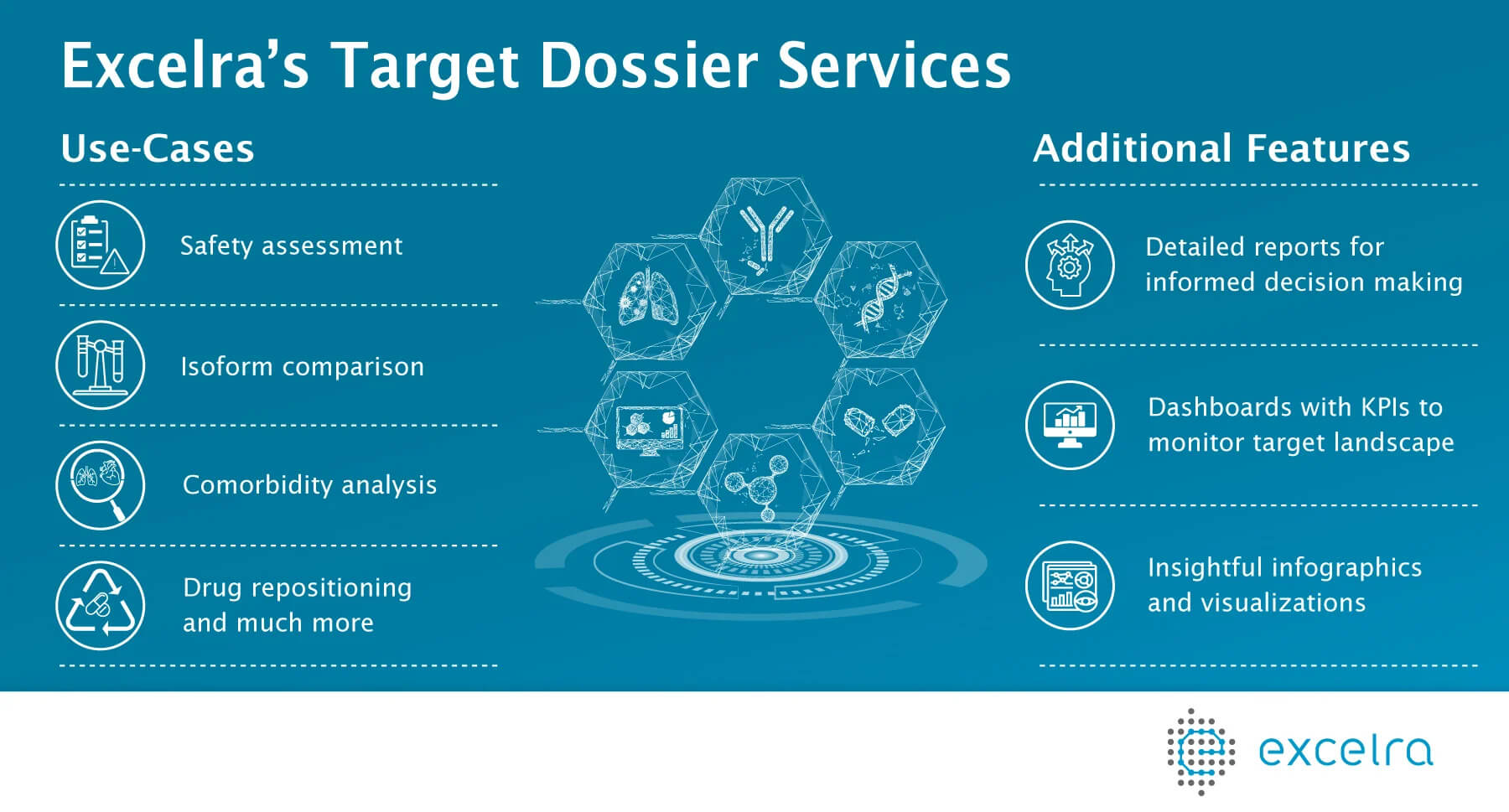 A comprehensive target dossier on two new targets (Isoforms) of interest for their comparative assessment.

The role and mechanism-of-action (MoA) of both isoforms were established in the disease of interest. One isoform was recommended over the other given that it would be first in class therapy with no current evidence of clinical testing in humans and easier to target based on crystal structure analysis.

Better understanding of disease, availability of suitable assays and experimental models, and clarity on the basic molecular mechanisms lead to the successful identification of a promising drug target (7). A comprehensive scientific document on a potential drug target will assist in an early evaluation of potential safety concerns and opportunities for commercialization. It will also reduce the possibility of attrition, enhance the pace of drug development and aid in early decision-making process.